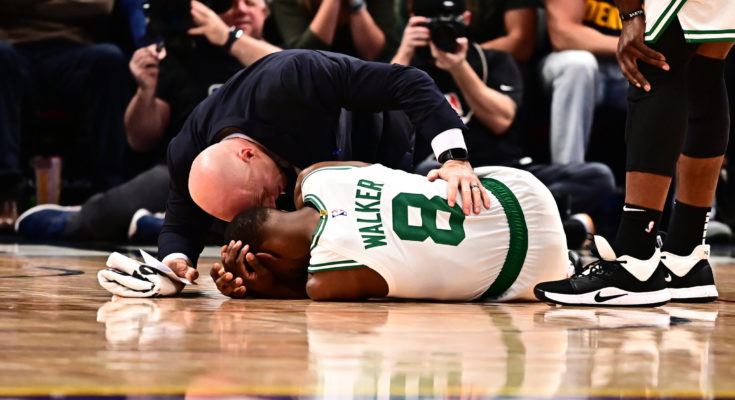 Boston Celtics star Kemba Walker was taken off the court Friday night on a stretcher with an apparent head injury against the Denver Nuggets.
In a scary scene, Walker went down after colliding with teammate Semi Ojeleye and stayed down for several minutes while trainers attended to him.
With a little more than two minutes to go in the second quarter, Walker tried to corral a loose ball in the lane. With his head down, Walker ran into Ojeleye, and the top of his head collided with Ojeleye's chest. The play started to head back toward the other end, but Celtics coach Brad Stevens quickly called a timeout.
A hush fell over the arena as trainers and team staff surrounded Walker on the floor. Walker was placed on the stretcher, which was then wheeled off the floor to a loud ovation from the Denver crowd.

Kemba Walker was taken off the court in a stretcher after this play pic.twitter.com/i1jcJeoDwB
— Celtics on NBC Sports Boston (@NBCSCeltics) November 23, 2019

Kemba Walker being taken out of the arena on a stretcher pic.twitter.com/UQX5qkwUFu
— Celtics on NBC Sports Boston (@NBCSCeltics) November 23, 2019

Shortly after his exit, the team announced Walker had been diagnosed with concussion-like symptoms and was being taken to the hospital for further evaluation. After the game, Stevens said all tests came back with positive results.
"I saw him in the ambulance at halftime," Stevens said. "He had his wherewithal about him. He was in decent spirits, which is good."
Late Friday night, the Celtics said Walker was released from the hospital to travel home with the team. He will be re-evaluated Saturday in Boston.
Walker had zero points on 0-of-3 shooting with three rebounds and two assists before leaving. He entered Friday's game averaging a team-high 22.6 points a game with 4.9 rebounds and 4.8 assists in his first season with the Celtics.
Boston started slow Friday even before Walker was injured, and appeared visibly shaken for the rest of the first half after Walker left. However, the Celtics rallied in the second half before the Nuggets held on for a 96-92 win.
"He's probably the smallest dude on the floor every time he steps out, but he's probably got the biggest heart," said Celtics forward Jaylen Brown. "We definitely lean on him and we'll welcome him back when he rests up and everything is taken care of."
Despite the loss, the Celtics are one of the top teams in the Eastern Conference early in the season. They're 11-4 and third in the East and doing it without forward Gordon Hayward, who is currently sidelined for at least another month with a broken left hand.
Shares
NEXT ARTICLE Next Post
PREVIOUS ARTICLE Previous Post
NEXT ARTICLE Next Post
PREVIOUS ARTICLE Previous Post