Kim Kardashian has been married to Kanye West since they said 'I do' at the Forte di Belvedere in Florence, Italy, in 2014.
And clearly the love is still strong between the 39-year-old reality TV star and the 42-year-old rapper after welcoming four children into the world.
'Just a post to say I love him so much ♥️,' the KKW beauty founder wrote to her 152M Instagram followers. 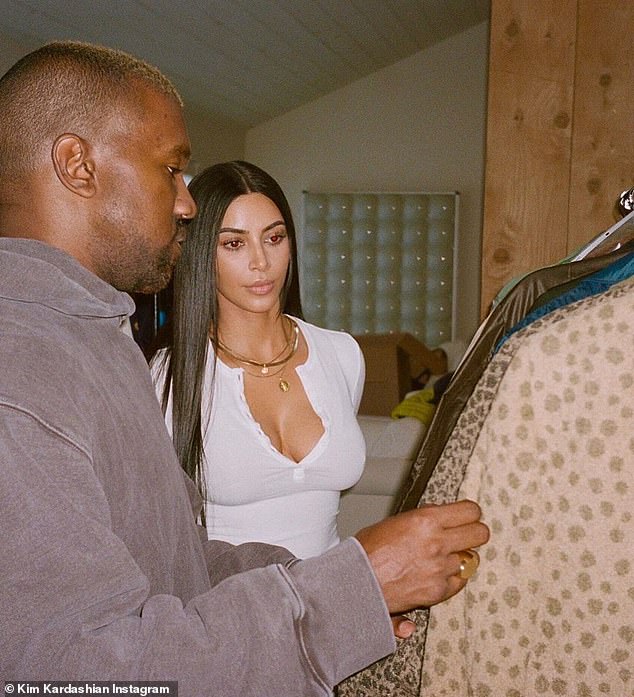 Still in the honeymoon phase: Kim Kardashian sent out a sweet message to husband Kanye West on Tuesday. 'Just a post to say I love him so much ♥️,' the KKW beauty founder wrote to her 152M followers

The images are older as Kim wears a skintight, low cut semi sheer white shirt with no bra. She also had on white sweatpants with pointy, laced-up light beige boots.
The Keeping Up With The Kardashians staple added several yellow gold necklaces that were designed by West. Her hair was down and stick straight with neutral makeup from KKW Makeup.
West kept it comfortable in a matted light brown hoodie and added a gold ring.
The two were looking at racks of clothing and Kanye seemed to be styling her. 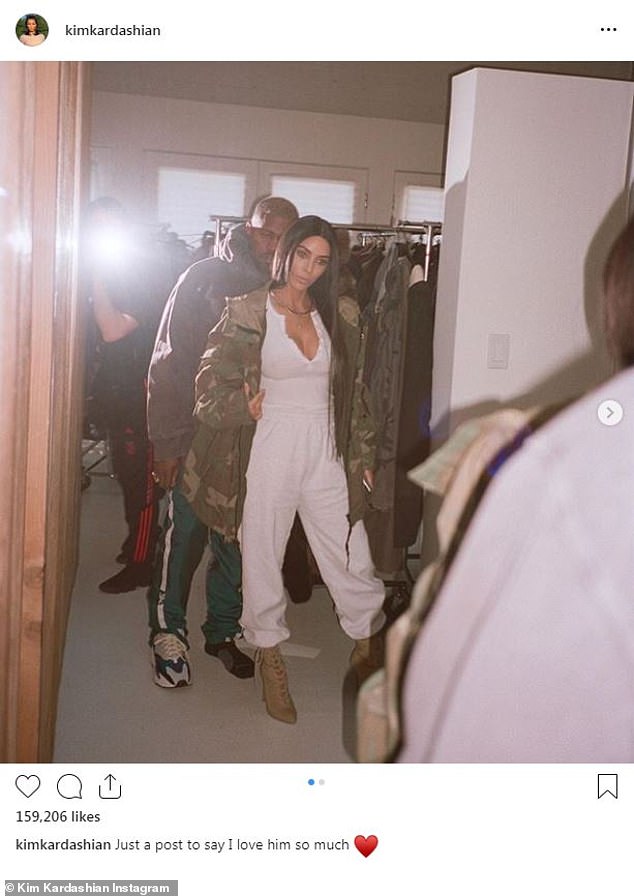 Styled by West: The images are older as Kim wears a skintight, low cut semi sheer white shirt with no bra. She also had on white sweatpants with pointy, laced up light beige boots
The TV star and the singer seem to be doing very well after a trip to New York City where they attended fashion events and filmed Keeping Up With The Kardashians.
Earlier this month Kim had said that her spouse wants her to dress more conservatively due to his born-again Christian beliefs.
While on The Real with her sisters Kourtney and Khloe she shed more light on his views.*** 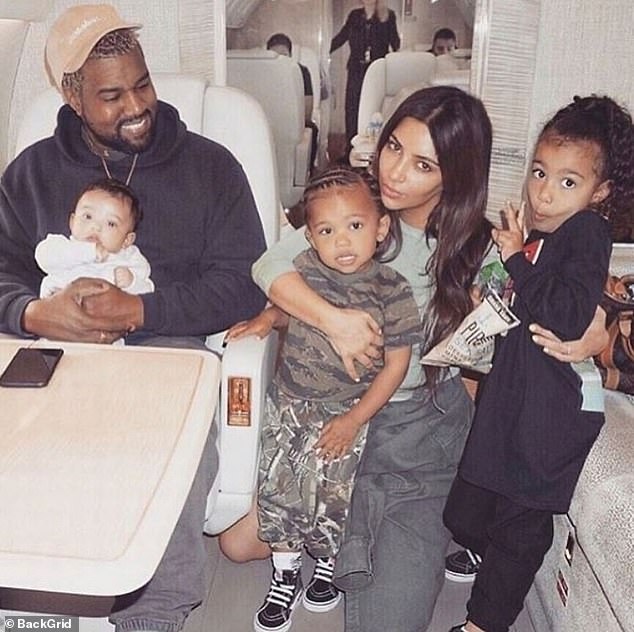 The family: Kim and Kanye have four children together: North, Saint, Chicago and Psalm

The California native was asked if she supports her the rapper's new spiritual life journey as she replied: 'I do think that, you know, he is my husband. So, I obviously want to honor him and what he’s feeling. And he’s been going through this life change, and it’s mostly about the kids.'
She said that as the children - North, three-year-old son Saint, 21-month-old daughter Chicago, and five-month-old son Psalm - are getting older , Kanye has become increasingly cautious about the type of imagery that is in their home.
Kim explained: 'We got rid of TVs in the kids’ rooms and removed makeup from North's room – and he’s been very… had this, you know, epiphany of being this - not that he wasn’t an amazing dad - but being a little bit more strict as a dad and being very forceful on the imagery that’s in our household and what they see. 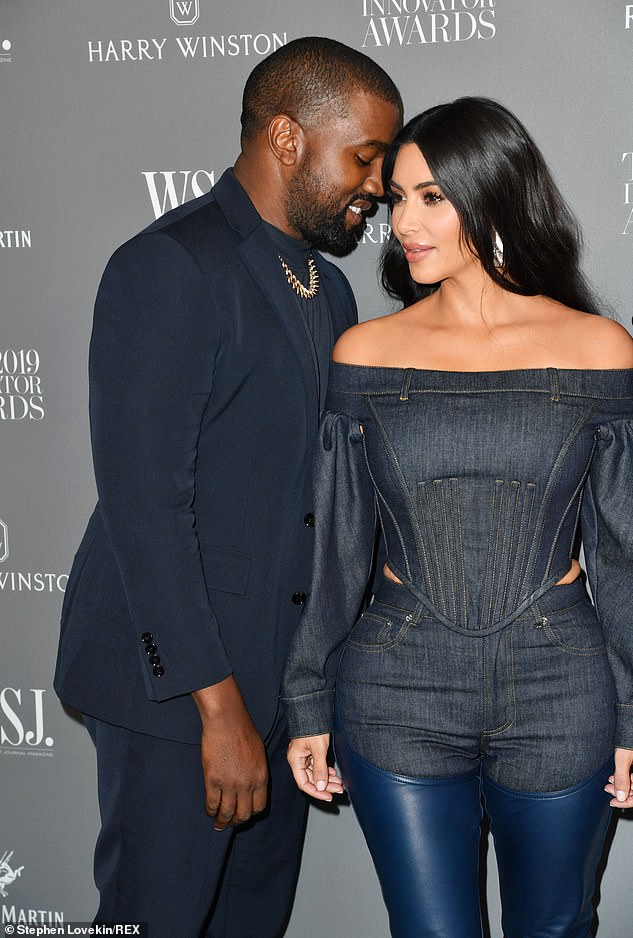 Kim Kardashian and Kanye West take their family out to lunch

So happy: The TV star and the singer seem to be doing very well after a trip to New York City where they attended fashion events and filmed Keeping Up With The Kardashians. Seen on November 6

She said that she agrees that such drastic measures are good for their children but it has been a bone of contention when it comes to Kim herself.
The reality star explained: 'But I’m always gonna be me… and so, we had that discussion and that fight.'
The audience applauded Kim's statement about standing up for herself before she admitted that compromise is essential to a healthy relationship.
She said: 'I think, at the end of the day that’s what marriage is. He’s gonna do things that I don’t agree with, and I support him, and vice versa. 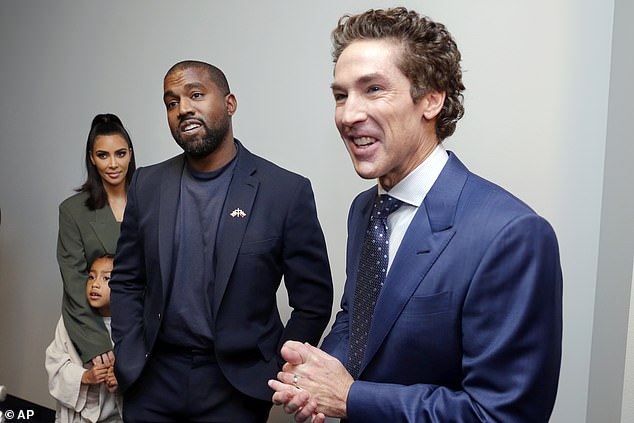 God x2: This weekend Kanye stopped by Joel Osteen's Sunday service show in Texas. Also seen was Kim and daughter North
'So, with this, it was like we were like just having this conversation of what is too much and I am a mother of four, like, I am gonna be forty next year, like, when is it time to...'
The middle Kardashian sister is cut off by the audience's applause about her age when host Tamera Mowry-Housely asks her to clarify if she is talking about Kanye's religious journey.
Kim explained: 'Yes. And just where he’s gone in his life and maybe things that he did a year ago, he probably wouldn’t be doing today.
'And I love that beautiful journey, as well. And I think that is such a great example for our kids. Um… but, you know, there’s also that fine line of, you know, staying firm and doing what you feel comfortable with.
'And I take a little bit of him and I respect what he’s saying and I totally compromise.' 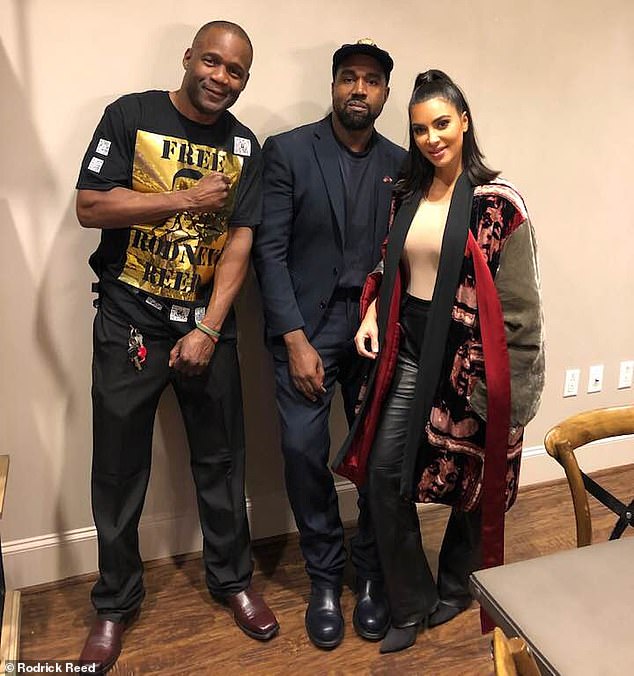 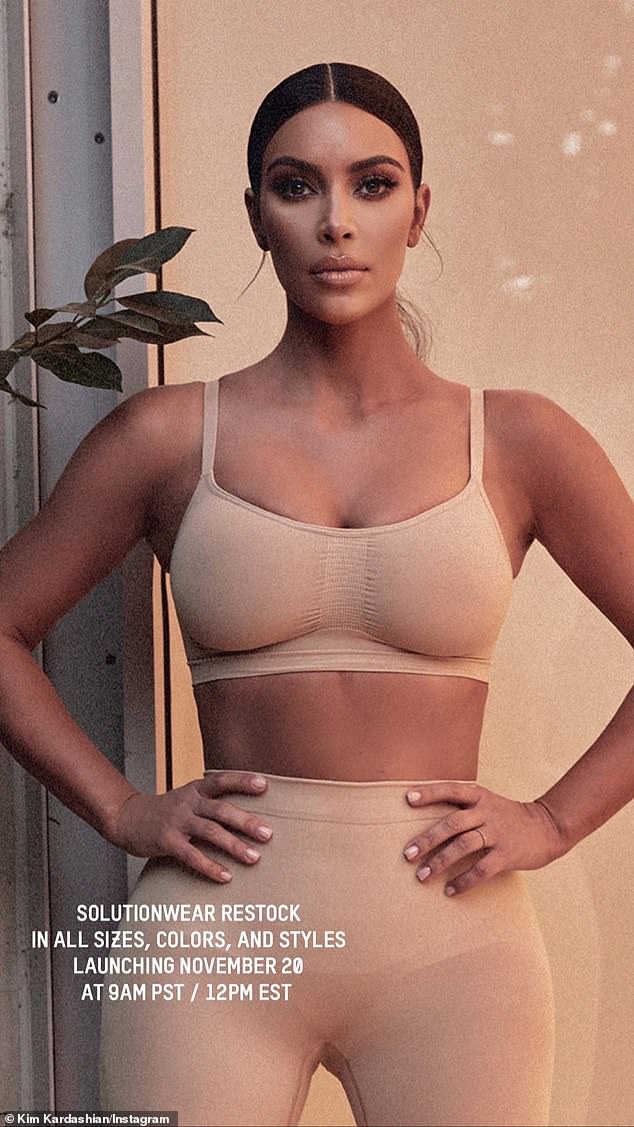 Kim being Kim: The siren has been modeling her SKIMS line even though her husband has asked her to not show her body off so much