2007  Kylie and Kendall Jenner looking adorable and fresh-faced back in 2007 around the time of the Keeping up With The Kardashians premiere.

2011
Before Jenner was known for wearing wigs in every shade of the rainbow, she tried extensions with hot pink tips.

2011  A Bohemian ponytail with ink lipstick and black eyeliner.

2012
Jenner looked perfectly summer-ready with a spray tan at a 2012 event.

2012
With slightly lighter hair, Jenner looked polished and pretty in 2012.

2012
Long ombré hair and a candy-red lipstick worn years before she even had Kylie Cosmetics.

2014
Right around the time Jenner allegedly started getting lip injections, at Coachella in 2014.

2014
Berry lipstick and teal extensions pulled back into a messy bun in 2014.


2016
Old Hollywood hair and makeup vibes on set of a Kylie Cosmetics campaign in 2016. 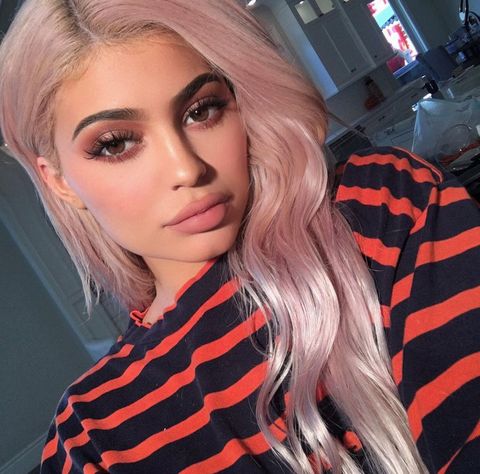 
2016
Jenner once again wore controversial braids on vacation in 2016.


2016
Jenner dressed as X-tina and posed with the superstar herself for Halloween in 2016.


2017
A magenta wig with eyes and lips to match for a Kylie Cosmetics collection campaign in 2017.


2017
A platinum-blonde wig inspired by Donatella Versace at the 2017 Met Gala.